WVA wins again! Wout Van Aert (Jumbo-Visma) won his second stage of the 2021 Tour de France with a victory in Stage 20, an individual time trial during a 30.8km ride from Libourne to Saint-Emilion.

The versatile Van Aert also won Stage 11 when he conquered a double ascent at Mont Ventoux, and finished second in a sprint in Stage 10. He locked up a third stage win for Jumbo-Visma to go along with American Sepp Kuss’ victory last weekend in Andorra.

Last year at the 2020 Tour de France, Pogacar snatched the yellow jersey away from Primoz Roglic with a dominating victory in a mountain time trial. This year, there was not the same level of drama with the yellow jersey locked up days earlier in the Pyrenees.

Yellow jersey leader Tadej Pogacar, who won the other time trial two weeks earlier in Stage 5, finished nearly a minute off the lead in eighth place. Pogacar stayed on his bike and avoided a crash to officially lock up the overall victory in the Tour de France with one sprint stage remaining tomorrow in Paris.

🏅 @WoutvanAert put in a huge shift as he won his 2nd stage of the #TDF2021 and his first Tour TT!

On the next-to-last day of the Tour de France, cycling fans flocked to the road between Libourne and Saint-Emilion. It was a festive atmosphere with fans cheering on the riders as they completed the time trial and penultimate stage.

“Winning the Tour de France time trial has been one of my biggest objectives in my career,” said Van Aert. “Compared to the first TT it was more rolling and faster. With my weight, it was more to my advantage than the first one, which was punchier. It was a perfect day.”

Kasper Asgreen from Deceuninck-QuickStep set the best time with 36:14 before Van Aert finished 21 seconds ahead of the Dane. Asgreen settled on second place in Stage 20. Jonas Vingegaard, Van Aert’s teammate at Jumbo-Visma, finish in third in the time trial and 32 seconds behind Van Aert.

Jumbo-Visma finished first and third in Stage 20, which is impressive considering they’re down to four riders out of eight. Plus, Jumbo’s top rider – Primoz Roglic – dropped out in the Alps after he suffered numerous injuries and road rash when he crashed hard multiple times Brittany at the onset of Le Tour.

“It’s been a really hard Tour de France for our team, but we always fought through and in the end, we have three stage wins and Jonas in second in GC which is an amazing result with only four guys left.”

On Deck Stage 21: Sprint in Paris

The final stage heading into Paris is usually a formality with riders simply thrilled that they made it all the way to Paris and survived another grueling Tour de France. However, Stage 21 this year is not a throwaway stage. Mark Cavendish and Eddy Merckx are tied with 34 stage wins and this is Cavendish’s last chance to break the record this year. All eyes will be on Cavendish, who already won four sprint stages this year, as the Manx Missile has his sights set on career-win #35 on Sunday at the Champs-Elysees.

There were no changes in the top five of the overall general classification standings. Pogacar will end up winning Le Tour this year by over five minutes. The young Slovenian will become the youngest two-time winner in Tour de France history.

Vingegaard took third in Stage 20 and locked up the second spot on the final podium in Paris. He opened a 1:43 lead over Richard Carapaz (Ineos Grenadiers) in third place. Ben O’Connor (AG2R Citroen Team) and Wilco Kelderman (Bora-Hansgrohe), both ten minutes behind Pogacar, round out the top five.

Check out more coverage of the 2021 Tour de France. 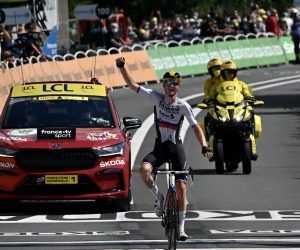 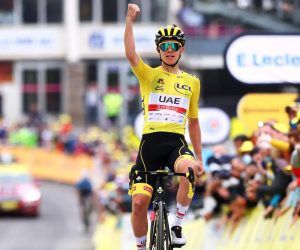