Trainer Mark Casse’s War of Will is the likely favorite in Saturday’s $400,000 Risen Star Stakes, the major Kentucky Derby prep this week at the Fair Grounds Race Course in New Orleans. But he’ll have to overcome an outside post position if he wants to visit the winner’s circle.

The Casse pupil must be at his best to overcome the grandstand-side draw that is likely to force jockey Tyler Gaffalione to try and gun out of the starting gate for early position near the pace rather than rationing the son of War Front’s speed for a late run from behind. The morning line maker is tabbing War of Will at projected odds of 5/2.

War of Will, who has the acronym “Wow” as his stable nickname, was a dominant winner in the Lecomte Stakes at the Fair Grounds last month, stamping himself as a serious Derby contender for Casse and owner Gary Barber. Despite his War Front pedigree – War Front is one of the world’s top sires of grass runners – War of Will is thriving since moving to the dirt.

The Risen Star at 1 1/16 mile awards points to the first four finishers and is the initial 50-20-10-5 race on the Kentucky Derby points schedule. That schedule determines which of the top 3 year olds have priority to enter the 20 starting positions at Churchill Downs in Louisville. The prestigious 1 1/4 mile “Run for the Roses” is set for May 4 – the first Saturday in May.

The Risen Star, is carded as the 12th and final race on a stakes-laden program, with a projected 7:02 p.m. ET post time. Last year, Hall-of Fame conditioner D. Wayne Lukas saddled the hard-knocking Bravazo to win the Risen Star, blowing up the tote board by paying $44.00 for the win. Bravazo was recently seen in January’s Pegasus World Cup at Gulfstream Park. In the 2018 Risen Star, he keyed a $603 exacta for $2 – first two horses in order – with fellow long shot Snapper Sinclair.

Last year’s Triple Crown winning trainer Bob Baffert with Justify has already indicated he’s scratching his entrant, Kingly, who drew the 13 post position in what is a full field. Baffert is unhappy with the draw for his colt and for Chasing Yesterday, who would have been the likely favorite in the Rachel Alexandra, a $200,000 event for 3 year old fillies on the Fair Grounds undercard. Chasing Yesterday, a half sister to 2015 Triple Crown winner American Pharoah, also trained by Baffert. Chasing Yesterday is slated for post ten in a ten-horse field.

The defection of Kingly would move War of Will a little closer to the rail slightly shortening his run to the first turn. It would also allow Gun It, an also-eligible for trainer Steve Asmussen into the race.

An unusually bullish Casse said after War of Will speedily worked a half-mile in :47 1/5 Saturday at Fair Grounds,

“I don’t think that he could have worked any better, so that was good. It’s pretty well the same bunch (in the Lecomte) that he’ll be up against. Obviously the post is outside, but we’d rather be out there than inside. He’s got enough speed so he’ll get over, and if he’s as good as we think he is, it shouldn’t matter.”

War of Will is currently in 12th position in the Kentucky Derby points standings. Click here for a current list of points leaders.

Next stop on the New Orleans route to Kentucky Derby glory: the $1 million Louisiana Derby at the Fair Grounds on March 23. It’s a 1 1/8 mile Derby prep worth 100 points to the winner, usually more than sufficient to guarantee a spot in the gate at Churchill Downs. 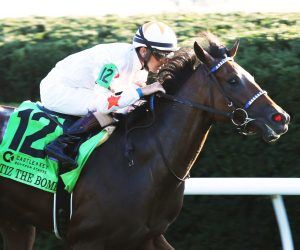