The NFC East could be the most competitive division in the league this year. There are four teams that could legitimately finish first, making key players even more valuable.

Running backs Derrius Guice of Washington, and Saquon Barkley of the Giants will be pivotal for offensive success. This is also the year Philadelphia’s Carson Wentz has to show that he can stay healthy for 16 games.

Every team has a player that they can’t be without. This is the next installment in a series about players that teams simply cannot afford to lose.

The second-year running back missed all of his rookie season with a torn ACL, but is back, and apparently better than before. He saw his first preseason action last week against the Falcons and Washington coach Jay Gruden wanted to get him the ball.

“Wanted to give him quite a few touches,” Gruden said. “Get him some rhythm, a sweat. Get used to hitting the ground, getting hit, tackled, protecting the football. … I think it was a productive night for him. Looked like he was decisive with his cuts for the most part, ran with some power at times, moved the pile when there wasn’t anything there. I was impressed.”

Guice had 11 carries for 44 yards against the Falcons, and could be a big part of the offense, especially as starter Adrian Peterson will probably see less action because of his age.

As Saquon Barkley Goes, so do Giants

If anyone is crucial to their team’s success it is the Giants’ second-year running back. Barkley finished his rookie year with 1,307 yards, and 11 rushing touchdowns. He also had 721 receiving yards and four touchdowns.

“The more you are around Saquon, you realize he has a generational spirit,” head coach Pat Shurmur told reporters on Thursday before the team’s first workout of training camp. “It shows up on gameday, in the locker room and behind the scenes.”

The quarterback position may very well depend on how successful Barkley is this season. Eli Manning has the starting job, but for how long? He has Barkley to open up the passing game, and an improved offensive line. The linemen should also give Barkley better stats than he had last season.

Not First Choice, but Still Vital

There are several players on the Dallas Cowboys defense that are better than DeMarcus Lawrence. Byron Smith, Jaylon Smith and Leighton Vander Esch can all be considered better than the sixth-year defensive end, but none are more important to the team’s defense.

Lawrence is a strong pass rusher, and finished last year with 10.5 sacks. That was less than the previous year, and for Dallas to go deep in the playoffs, he has to get to the quarterback more often.

With Randy Gregory possibly suspended for the entire season, and Robert Quinn missing the first two games because of disciplinary action, Lawrences’s role up front is only made that much more crucial. Bovada has him listed at 25/1 to win the Defensive Player of the Year.

When the Philadelphia Eagles won the Super Bowl two years ago without Carson Wentz, it was because they had a starting quarterback as his back up. Now that Nick Foles has moved on to Jacksonville, Wentz will have to carry that load by himself.

He is definitely capable of that. He won 13 games that championship season before being knocked out with an injury. His stats when healthy are impressive. He has had quarterback ratings of 102.2 and 101.9 the past two seasons, so it isn’t a question of if he can do it.

The biggest issue is can he stay healthy. He suffered a torn ACL in 2017, and a stress fracture in his back last year. Wentz has to stay on the field, because the Eagles don’t have a comparable Plan B like with Foles in the past. 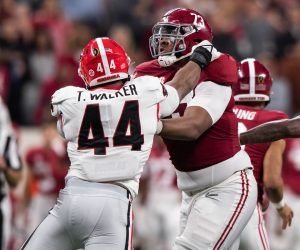