One of Saturday’s most prestigious races goes 1 ¼ miles and features the likes of Seattle Slew, Affirmed, Spectacular Bid and Pleasant Colony on its winner’s roll. That would be the Woodward Stakes at Saratoga, not the Kentucky Derby at Churchill Downs.

Even with the Derby sucking the racing and sporting oxygen out of America on Saturday, the Grade 1 Woodward plays on for the 67th time. The 10-furlong race for older horses headlines Saratoga’s 12-race card that includes three other graded stakes races. Prominent among those is the Grade 2 Jim Dandy, another consolation prize for 3-year-olds who — for whatever reason — missed the Derby.

Here are the morning lines for Saturday’s Woodward Stakes at Saratoga.

When it comes to Derby winners, more than a few didn’t miss the Woodward. The aforementioned four horses: Seattle Slew, Affirmed, Spectacular Bid, and Pleasant Colony, all followed their Derby triumphs by winning the Woodward the following year. Seattle Slew and Affirmed took home Triple Crowns along the way. But Spectacular Bid’s 1980 Woodward win may have been the most memorable.

It came in a walkover. Nobody wanted any part of the 1979 Derby and Preakness winner, so Spectacular Bid waltzed around Belmont Park by himself. It marked the last walkover in an American Grade 1 stakes race.

None of those, however, are Grade 1s. Tacitus won the Suburban this year, his first victory since winning the Grade 2 Wood Memorial in April 2019. That came a month-plus after Tacitus won the Grade 2 Tampa Bay Derby. But while he’s hit the board four times in Grade 1 races, Tacitus hasn’t navigated that last step up the class pyramid.

“Naturally, he’s a more mature horse from last year, which is normal,” Mott told the New York Racing Association. “He feels good early in the morning before he goes out, and he gets geared up and anxious to go once he gets going. He’s good to ride and he’s easy enough on himself to where he can take care of himself.”

Pletcher Brings in a Third of the Woodward Stakes Field

To counter that, three-time Woodward winning trainer Todd Pletcher fires back with two of the field’s six horses, Spinoff (3/1) and Moretti (8/1). Spinoff enters the fray fresh off his first stakes victory, the Alydar at the Spa. That came with a career-best 99 Beyer Speed Figure, a leap forward for a horse who missed the board in both the Derby and Belmont last year.

“He’s shown us hints along the way that he has potential for that breakthrough performance,” Pletcher said. “I thought the Alydar was arguably his strongest race. He’s 2-for-2 around two turns at Saratoga, so that’s encouraging as well. He’s finally matured and putting it all together.”

A $900,000 yearling purchase, Moretti also comes in off a win that illustrates 1 ¼ miles won’t be an issue. He won the 1 ¾-mile Birdstone last month at Saratoga. That followed his runner-up to Tacitus in the Suburban.

The other horse to watch is Global Campaign (5/2), who beat a hard-charging Math Wizard in last month’s Grade 3 Monmouth Cup at Monmouth Park. The Curlin progeny owns five victories in eight starts, but this is his Grade 1 debut.

Speaking of Math Wizard (12/1), he returns a mere eight days after a non-threatening fifth in the Charles Town Classic in West Virginia. The only Grade 1 winner in the field, Math Wizard was the 3/1 favorite in that race.

The pick: Spinoff. We’re buying his maturing as we’re selling Tacitus’ ability at this level. 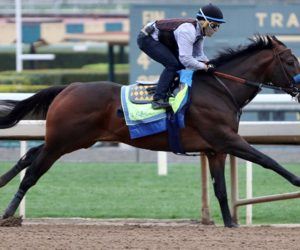 How Strong is This? Life Is Good Returning Against Jackie’s Warrior 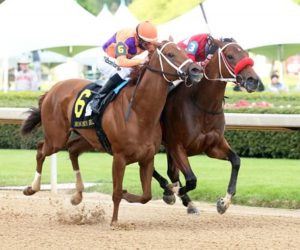