The WNBA 2020 regular season schedule gets underway on July 25 and runs through Sept. 12. The players are already bubbled (or wubbled) at the IMG Academy in Florida. Fortunately, fans won’t have to wait long for Sabrina Ionescu’s professional debut, scheduled for opening day.

The players are already at their facility in Bradenton, Florida. A number of people have noted that their wubble isn’t quite as nice as the NBA’s bubble. But the players are mostly taking their sequestration in stride and are looking forward to the start of the season. Until then, fans can follow the twitter handle Wubble Tea (@wubble_tea) for all the off-court action.

Meanwhile, fans will have ample viewing options as the league’s deal with the CBS Sports Network enters its second year.  And what CBS doesn’t cover will get picked up by ESPN’s networks (ABC, ESPN, and ESPN2).

The first week of the WNBA’s schedule includes a number of must-see games. On opening day, No. 1 draft pick, Sabrina Ionescu, makes her debut when New York goes up against Seattle. Regardless of Inonescu’s talent, the Liberty are still the underdog in this fight.

Another anticipated game is Day 2’s rematch between the Chicago Sky and the Las Vegas Aces. Last year, a mid-court heave sent the Sky packing and the Aces to the semis.

Meanwhile, all eyes will be on the 2019 WNBA Champion Washington Mystics. Their games against Indiana on July 25 and Seattle on July 31 should help sports bettors size up the significance of the team’s 2020 roster losses.

Mystics Favored, but for How Long?

Odds are still pending for regular-season WNBA games. The 2020 Championship futures, however, are available at some outlets. Washington is favored to win again in 2020, but if they do, it may be without their star player, Elena Delle Donne.

Delle Donne wrote about her difficulties battling Lyme Disease in The Players’ Tribune. Earlier this month, the 2019 MVP failed to get a medical exemption for the season. While she will still be on the Mystics roster and collect a salary, it’s doubtful she’ll take the court this season.

The Mystics’ Tina Charles, Natasha Cloud, and LaToya Sanders have already opted out of the 2020 season. So far, 11 WNBA players have decided not to play this year. 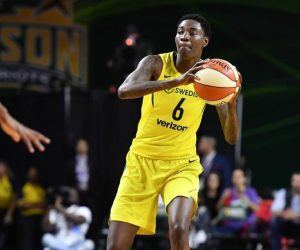 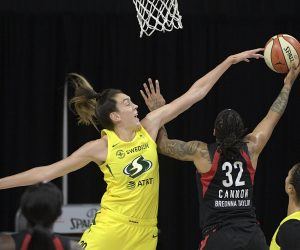