If by chance the NBA head office needs any weird ideas for the NBA postseason in our post-pandemic world, we compiled a few outside-the-box concepts for the conclusion of the season, including turning the NBA playoffs into a March Madness tournament, hosting an expanded best-of-nine NBA Finals, or adding a wild-card element to the postseason.

The NBA has been exploring different scenarios to continue the remainder of the regular season and playoffs in the post-pandemic world. Various ideas have been floated, like hosting the playoffs in a singular city like Las Vegas or at Disneyworld in Orlando, Florida. The NBA could also try to pick a city in the East (e.g., Orlando) and another in the West (e.g., Las Vegas) to play out their conference playoffs, with the NBA Finals hosted in a neutral venue (e.g., Utah).

In a perfect world, the league would resume with everyone playing in their own city. However, the coronavirus outbreak is affecting different cities and regions at different times so, even though several states are reopening, others are seeing an uptick in reported cases. At this point, the future continues to be unknown, but Adam Silver and the league are committed to finishing everything out.

A postseason tournament would get dubbed the “socialist playoffs” by the Drudge Report because everyone qualifies for the NBA playoffs. Even the horrible Knicks would earn a spot in the postseason with an NBA Playoffs Tournament.

The top seven teams from each conference that would normally make the playoffs would earn a bye. The other eight teams that failed to qualify would play in a single-game elimination mini-tournament. The winner would earn the #8 seed and square off against the #1 seed.

Or, how about all 30 teams in an NBA tournament? Put them all in a bracket with the East on one side and the West on the other. The better team hosts a game at home. The #1 seed from each conference would earn an opening-round bye. The top seed would meet the winner of the #14 and #15 matchup in the second round.

When they eventually whittle down to the Final Four, or the Conference Finals, those teams will play a traditional best-of-seven series. However, everything prior to that would be a thrilling single-elimination tournament.

Play-in Games or Wild-Card Round

The suits running the NBA and the network execs would drool over the prospect of an expanded postseason, additional playoff games, and a wild-card round.

How about adding one extra team from each conference? The #9 seed would meet the #8 seed in a best-of-three. The winner of that play-in round would then meet the #1 seed in the next round.

Heck, how about a wild-card game with 10 playoff teams in each conference? The #9 seed and #10 seed would meet in a single-game elimination wild-card game. The winner of the wild card would then play the #8 seed in a play-in round best-of-three (mentioned in the previous paragraph). At the minimum, the NBA would reap three additional playoff games per conference, or a total of up to eight additional playoff games. That extra week would give the other playoff teams the opportunity to rest up before the postseason grind begins.

The NBA has already entertained the idea of modifying the length of each playoff series. I suggest going for the 3-5-7 option.

In the opening round, everyone plays a best-of-three series. The downside … the better seed gets all three playoff games. That benefits the top seeds and makes it more difficult for higher seeds to pull off an upset.

In the second round, the conference semifinals would feature a best-of-five series. The format would breakdown as 2-2-1, with the better seed hosting home games in Game 1, Game 2, and Game 5. The lower seed would get consecutive home games in Game 3 and Game 4.

The conference finals would revert to the traditional best-of-seven series. I always preferred the 2-2-1-1-1 method versus 2-3-2. Why do you give the worst seed three consecutive home games?

I recently saw “Eight Men Out,” a film about the Chicago Blacksox scandal when the team threw the 1919 World Series. One hundred years ago, the World Series was a best-of-nine affair. The team that won five games first secured the championship.

Here’s an idea inspired by baseball a century ago: a best-of-nine NBA Finals? How cool would it be to see Steph Curry and LeBron James slug it out over a nine-game series?

Or, if the NBA really has limited options to continue the postseason, they should simply host the NBA Finals with the top two seeds from each conference in a best-of-nine series. The LA Lakers and Milwaukee Bucks, currently co-favorites at 5/2 odds to win the 2020 NBA Championship, would automatically advance to the NBA Finals as the #1 seeds from the respective conference.

What more could you ask for other than the Greek Freak vs. LeBron in a best-of-nine NBA Finals series? How about a maddening, nine-game zig-zag trend for NBA bettors?

But what if the team sucks? Let them in the playoffs anyway, but with the #8 seed. The NBA champ always deserves a shot to defend their crown in the postseason. Perhaps giving a bubble team the #1 seed would be too much of stretch. So, let’s give them the #8 seed instead. 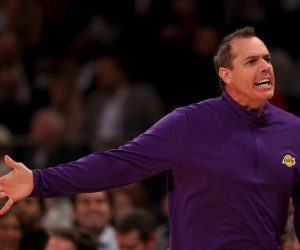 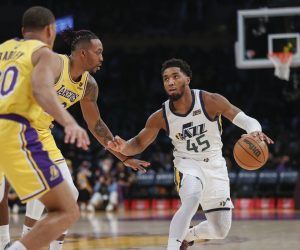