The Times of London reported on Thursday that the 2020 Tokyo Olympics – already postponed to July 2021 – will be canceled, but organizers still say they plan on holding the Games this year.

The local organizing committee and the International Olympic Committee have both pushed back on the report, saying that the Olympics will go forward as scheduled.

Organizers also say that they have the backing of the Japanese government. That contradicts the Times report, in which an unnamed government official said the writing is on the wall for the Tokyo Olympics.

“No one wants to be the first to say so, but the consensus is that it’s too difficult,” a senior member of the ruling coalition told the Times. “Personally, I don’t think it’s going to happen.”

According to polling, around 80% of Japanese citizens are against holding the Tokyo Olympics this year. The country has spent $25 billion to prepare for the Olympic Games.

At issue is the COVID-19 pandemic. The coronavirus forced the postponement of the Olympics last year, and the winter surge in cases that’s gripped the Northern Hemisphere is threatening to make it difficult to organize the Games safely in the next six months. Not only must thousands of athletes travel to Tokyo and compete there, but many nations and sports still need to hold qualifying competitions.

“All our delivery partners, including the national government, the Tokyo Metropolitan Government, Tokyo 2020 Organizing Committee, the IOC, and the IPC are fully focused on hosting the Games this summer,” the statement read. “We hope that daily life can return to normal as soon as possible, and we will continue to make every effort to prepare for a safe and secure Games.”

The Japanese government has not directly responded to the cancellation reports. However, many Olympic officials around the world have discussed the issue.

The United States Olympic & Paralympic Committee also released a statement saying that they have no information that the Tokyo Olympics are in danger of cancellation.

Now learning that the COC, along with all other NOCs will be meeting with IOC President Thomas Bach early tomorrow.

An internal letter sent to Canada’s NSOs says they will “attempt” to learn more about and get clarity on the Games going forward. @CBCOlympics @CBCAlerts

“We have at this moment, no reason whatsoever to believe that the Olympic Games in Tokyo will not open on the 23rd of July,” Bach told Japanese news agency Kyodo on Thursday. Bach added that there is “no Plan B” for the Tokyo Olympics. 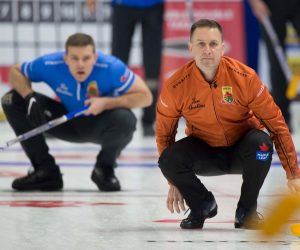