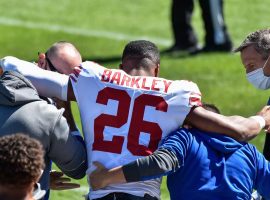 New York Giants running back Saquon Barkley suffered a season-ending knee injury when he tore his ACL against the Chicago Bears. The Giants invited free agent RB Devonta Freeman to a work out in hopes they can sign him after Barkley’s injury. Medical staff carted Barkley off the field when […] 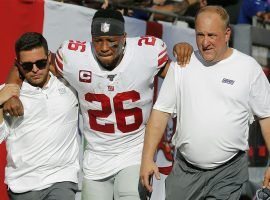 New York Giants running back, Saquon Barkley, sprained his ankle and left the Tampa Bay Bucs game, only to return to the sidelines on crutches with his right foot in a boot. The Giants pulled out a 32-31 comeback victory after a sensational debut from rookie quarterback Daniel Jones, but […] 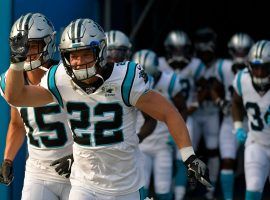 If you have the #1 pick in your fantasy football draft, which RB do you pick, Saquon Barkley or Christian McCaffrey? Barkley is probably the better player, but the New York Giants are a weird team. McCaffrey has the benefit of a younger QB with the Carolina Panthers, plus Cam […]