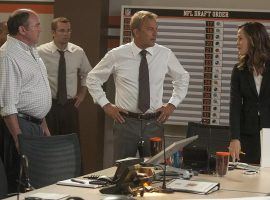 Kevin Costner, finally appeared in a football movie in Ivan Reitman’s ‘Draft Day’, a 2014 film with Costner playing Sonny Weaver, the general manager of the Cleveland Browns. The movie takes place as a glimpse into a single day in the life of a pro football GM during the NFL […]