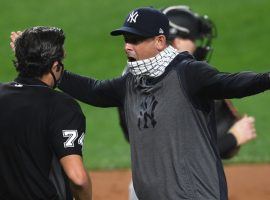 New York Yankees manager Aaron Boone had enough of the poor umpiring and lashed out at umpire John Tumpane’s inconsistent strike zone, which resulted in an ejection. Tumpane threw Boone out of the game for questioning balls and strikes. Jomboy quickly posted a video clip of the ensuing argument that […]