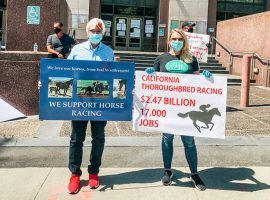 Bob Baffert and Doug O’Neill built a rivalry among the Santa Anita Park training colony, fueled by the fact that they’ve trained a combined four Kentucky Derby winners since 2012. But the two training mainstays put aside their rivalry on Tuesday to lead a demonstration outside the Los Angeles County […]