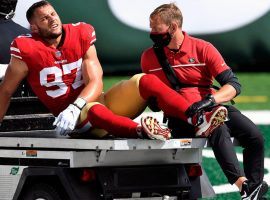 The New York Jets and New York Giants are bad enough, but the last thing they need is a lingering NFL conspiracy theory about the shoddy new turf installed at MetLife Stadium. The San Francisco 49ers aren’t thrilled to be playing the Jets and Giants in consecutive weeks at MetLife […]