Roger Federer says he’s pain-free and preparing to play at the Australian Open this January. But oddsmakers aren’t convinced the seemingly ageless wonder will be able to overcome knee surgery and return to his winning ways at age 39.

Federer played in the 2020 Australian Open, but sat out the remainder of the season after undergoing an arthroscopic procedure on his right knee for the second time.

Federer Back in Training, Needs Time for Match Fitness

The good news for Federer fans is that the 20-time Grand Slam champion says he’s back to practicing without pain. However, his training is limited for the moment while he works himself back into shape.

“More than two hours with the racket are not possible at the moment,” Federer told Schweizer Illustrierte, a German-language magazine. “But I’ve been working on my stamina and strength absolutely without pain for a while. There will be no further operations.”

That means Federer is still some time away from actually competing in a tournament, though he says that January is a realistic target at this point.

“I’m gradually coming back, but I’m going to take my time and don’t want to put any pressure on myself,” Federer said. “I will only take part in a tournament when I am 100 percent fit. At the moment, it looks like I can make my comeback at the Australian Open in January.”

The Australian Open has played a major role in Federer’s late-career resurgence. After four years without a Grand Slam title, Federer took his 18th at the Australian Open in 2017. He repeated as champion there in 2018.

Even this year, Federer reached the semifinals in Melbourne before bowing out to Novak Djokovic in straight sets. Before his injury, Federer made it to at least the quarterfinals in each of the past four Grand Slams, dating back to the 2019 French Open.

Those results would suggest that Federer still has a chance, even at an age when most elite tennis pros have retired. But it’s also worth noting that he hasn’t won a Grand Slam since that 2018 Australian Open. And it will only get harder for Federer to compete against his main rivals – Djokovic and Rafael Nadal – and the younger generation as he approaches and passes the age of 40.

Federer will come into the Australian Open as a contender, but one that oddsmakers see as far behind the top favorites. DraftKings Sportsbook lists Federer as a +900 pick to win the tournament, good for the fifth choice in the market. Djokovic tops the board at +100, with Nadal (+400) posted as the second choice.

It’s unlikely Federer will ever come into a Grand Slam tournament as a favorite ever again, but even if that’s the case, he says he’s not quite ready to retire just yet.

“I have been thinking about ideas for about five years,” Federer said. “But as long as I am having fun and it’s right for all of us, I’ll keep going.” 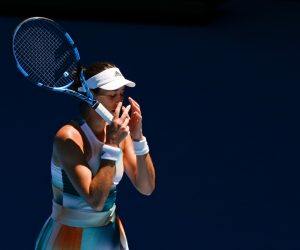