Heavy favorites Coliseum (3/5) and Code of Honor (4/5) both failed on Saturday to live up to the betting hype in their first Kentucky Derby prep races for 3-year-olds in California and Florida. Their results, or lack thereof, left presumptive 2-year-old champion Game Winner as the standout in the ongoing run-up to this year’s Triple Crown events.

Bob Baffert-trained Coliseum was the top pick to win the Sham Stakes at Santa Anita in Arcadia, California, and across the country, at Gulfstream Park in Hallandale, Florida, Code of Honor was the horse who didn’t deliver in the Mucho Macho Man Stakes.

These two races, both contested at one mile, mark the beginning of the serious running towards the 2019 Kentucky Derby — and offer a stretch of races in which elite horses are supposed to begin separating themselves from the pack. Six of the last seven Derby winners took a path to Kentucky that ran through California or Florida. But as of this weekend, as usual in horse racing, it’s anything but clear which horses are a sure thing.

In Florida, at the $100,000 Mucho Macho Man at Gulfstream Park in Hallandale, Florida, Code of Honor finished a disappointing fourth. However, it’s not exactly what bettors had been expecting him to deliver.

Code of Honor was under top rider Jose Ortiz, but never posed a serious threat, finishing 7½ lengths behind the winner in a field of just six runners.

The win went instead to Mihos ($7.80), who rallied off the pace in his stakes debut to take the victory.

Mihos came into the race as a 5/2 second betting choice, after impressing in a six-furlong maiden special weight race at Aqueduct in November.

“He was going easy, but at the quarter-pole he took a deep breath and let the bridle go,” jockey John Velazquez said of the Shug McGaughey-trained colt who had won his debut at Saratoga last summer and finished second in the Grade 1 Champagne Stakes at Belmont.

The following races present two paths for 3-year-olds to win their way to the Derby. The major Derby preps move up in graded status and major purse money as horses from across the nation seek to enter the gate at Churchill Downs the first Saturday in May.

Over on the west coast, in the $100,000 Sham Stakes at Santa Anita, high hopes were on Coliseum, the well- regarded speedster from the barn of last year’s Triple Crown trainer Baffert. In November at Del Mar, he won by nearly seven lengths, earning a 91 Beyer Speed Figure with that effort marking him a leading Kentucky Derby prospect.

But ridden by jockey Joe Talamo this weekend, Coliseum was jostled, breaking poorly from the gate and racing wide throughout to finish a well-beaten sixth in a field of seven.

Baffert’s other horse in the race, Much Better, did a little better, leading for a bit and ultimately finishing third.

Ultimately, the winner was Gunmetal Gray ($9.40), trained by Jerry Hollendorfer and ridden by jockey Mike Smith.

“Mike knew we wouldn’t be near the lead and we were hoping to get some pace to run at,” Hollendorfer said. “Mike sat back, bided his time and he ran them down.”

Hollendorfer credits the win to a really good two months of training since Belmont.

Rival trainer Baffert, meanwhile, is expected to regroup as he determines if the lightly raced Coliseum’s inexperience betrayed him, or if possibly there were physical issues that might have caused the favorite’s unexpectedly poor performance at such an important time. 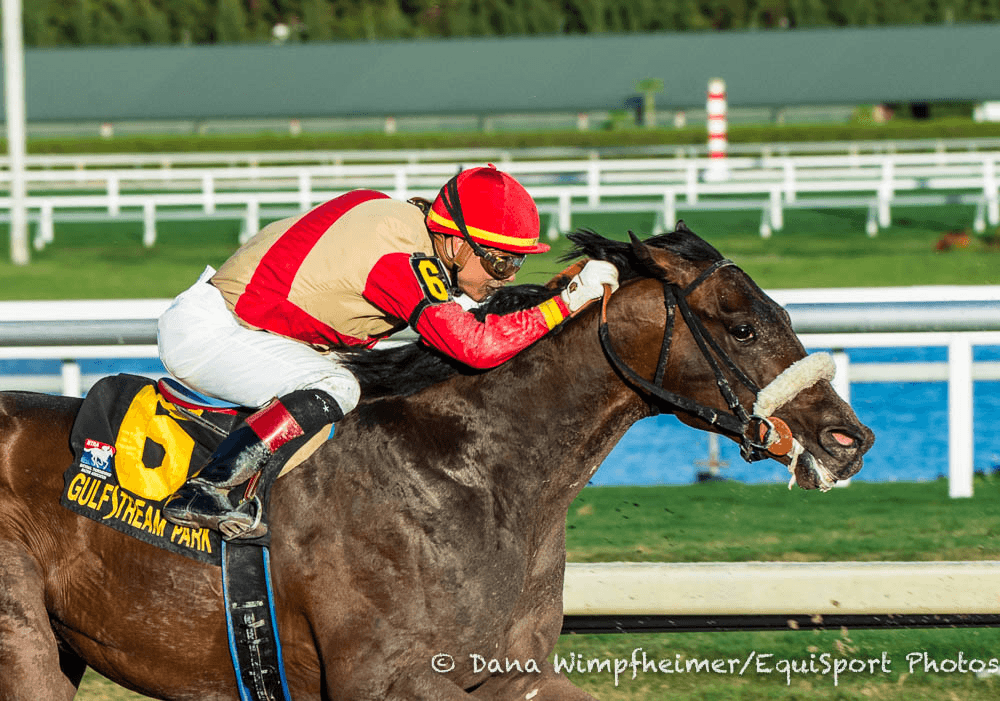