Only nine teams in the NBA boast a winning record on the road this season. Of those, the Los Angeles Lakers (12-1), Milwaukee Bucks (10-2), and Dallas Mavericks (8-2) are the best road teams in the league, with a combined 30-5 away record.

LeBron James and the Lakers actually have a better road record (12-1) than home record (10-2) this season. The Lakers rose to the top of the Western Conference thanks to a sensational record outside of the Staple Center. LeBron is one of the most popular players in the entire history of the NBA, and his legion of fans will show up to watch him play at any arena in North America. The Lakers often draw huge crowds on the road, which gives them an added edge on road trips.

The Greek Freak and the Bucks have the best record in the NBA. Much like the Lakers, they’re equally tough at home and on the road. The only difference is that the Bucks don’t have a huge, nationwide fan base like the one the highly-popular Lakers enjoy.

The Mavericks dazzle crowds when they take Luka Doncic and his triple-double capabilities on the road. If there’s one player that fans don’t want to miss, Doncic is at the top of the list.

The Houston Rockets boast the fourth-best road record this season. The Rockets are only 7-5, which is a testament to the difficulty of winning on the road.

Combined, the Mavs and Rockets are 15-7 on the road this season.

The LeBron and AD Show

What a difference a player like Anthony Davis makes, eh? The Lakers solidified their status as one of the best teams in the NBA when Davis joined the team after the Lakers and Pelicans pulled off a blockbuster trade. Davis and LeBron look like they’ve been playing together for a half-decade, and we’re only a quarter of the way through the season.

Fans are showing up in huge volumes to watch LeBron, Davis, and the Lakers whenever they hit the road. As a result, home teams often find themselves playing in front of a hostile crowd on their own turf. That’s the LeBron effect, and the powerful attributes of the purple and gold.

The Lakers’ biggest strength has been their stellar defense, which is allowing only 103.9 points per game this season. Only the Orlando Magic and Denver Nuggets hold teams to fewer points. The Lakers defense is anchored by Davis, who can block shots from pretty much anywhere on the court. He’s become a human fly swatter that can thwart players attacking the basket, and he’s quick enough to defend 3-point shots from both little guys and big men.

The Lakers are 8-5 ATS on the road this season, with an overall 12-1 away record.

Greek Freak and the Traveling Circus

Dating back to the preseason, the Bucks were the team to beat out of the Eastern Conference this year. The Greek Freak has guided the Bucks to the best record in the NBA (22-3) through the first 25 games of the season.

The Bucks are in the middle of an epic 16-game winning streak, including 13 in a row at home. They also won seven straight road games. The Freak doesn’t disappoint opposing fans when the Bucks come to town. Unlike other high-profile stars, the Freak only misses games when he’s legitimately injured.

Head coach Mike Budenholzer doesn’t adhere to the load management philosophy, which provides optimal entertainment for all basketball fans because you never have to tune in to a Bucks road game and wonder if the Freak will sit that game out.

The Bucks are 10-2 away from Milwaukee this season, including a 6-6 ATS clip on the road.

In case you were wondering, we also compiled a list of the top home teams in the NBA this season. 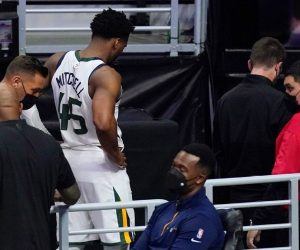 Donovan Mitchell Exits Game 3 with Ankle Injury, Will Play in Game 4 vs. Clippers 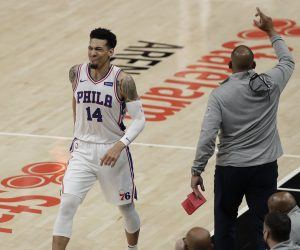