The NHL will take the ice later this week for the first time since the commissioner paused the season on March 11 during the earliest stages of the coronavirus outbreak. The Tampa Bay Lightning and Boston Bruins are co-favorites to win the Eastern Conference at 7/2 odds, according to a recent update by the Westgate SuperBook in Las Vegas.

The Eastern Conference will play all of its games in a “secure zone” in the hub city of Toronto in Ontario, Canada. Action will resume on Aug. 1.

Only 12 teams from the east qualified for the restart. The top four teams (Tampa Bay Lightning, Boston Bruins, Toronto Maple Leafs, and Washington Capitals) will compete in a special round-robin tournament to determine the #1 seed. The other eight teams will meet each other in a best-of-five play-in series to determine who will play the top four seeds in the second round.

When the season paused in early March, teams had approximately 10-12 games remaining in the regular season.

The Washington Capitals (41-28-8) topped the Metropolitan Division with 90 points.

We’re in unchartered waters with the resumption of the NHL. If we were astronauts, we’d be traveling on the edge of the galaxy. At this point, you can stick to the betting basics or employ “ABC” techniques to handicapping and betting. Or, you can attempt to look outside the box and fire away at some middle teams.

Don’t forget that the Tampa Bay Lighting utterly destroyed the opposition in the 2018-19 regular season only to get upset (and swept!) in the first round of the 2019 playoffs.

So. if you’re seeking value, then four teams in the chase pack might tickle your fancy. The Toronto Maple Leafs (81 points), Philadelphia Flyers (89 points), and Washington Capitals (90 points) are all 6/1 odds to win the Eastern Conference. If you want to correlate their Stanley Cup odds, all three teams are also 12/1 odds to win the Cup.

It’s been 27 years since a Canadian team won the Stanley Cup, and it’s been wise to fade Canadian teams in the playoffs in the 21st century. In the pandemic, however, you never know what can happen. The Leafs are playing inside a bubble, but at least they all have the familiarity of playing on their own ice at Scotiabank Arena and in their own city.

The Montreal Canadiens (71 points) are the only other Canadian team from the east that qualified for the postseason. The Habs are 50/1 long shots to get hot in the postseason and to run the table to secure the Eastern Conference title. 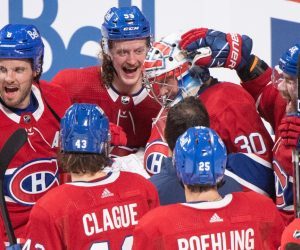