The PGA Tour heads to Playa del Carmen in Mexico this week for the Mayakoba Golf Classic. El Camaleon Golf Club will again host the tournament, playing at par 71 and 7,039 yards. Justin Thomas is among the top golfers leading a so-so field of 132 players, but Carlos Ortiz is an overlooked player who I believe will have a good week on the links. The top 65 plus ties will make the cut.

Here are five players who stick out to me for DFS lineups.

Besides missing the cut at the Sanderson Farms Championship, Zalatoris has been solid in his short time on tour. He made the cut in 20 of 21 events while playing on sponsors’ exemptions, including 13 trips to the top 10 against fields of similar caliber to the Mayakoba.

The narrative for Ortiz is strong: a Mexican has never won the Mayakoba, and he’s played good golf lately. That includes a victory at the Vivint Houston Open last month and made five cuts in his past seven tournaments. He hasn’t played since that win, so let’s hope rust doesn’t prove to be a negative factor. Ortiz finished second at Mayakoba in 2019.

We should see Munoz’s salary continue to rise if he keeps up his torrid pace. He’s finished outside the top 30 only twice in his past 10 starts, and notched a 19th at the Masters. While Munoz missed the cut at the RSM Classic, his first missed weekend since August, that could be attributed to the post-majors lull common to tour golfers.

Another player who missed the cut at the RSM Classic, which could help depress his ownership level in DFS, Reavie has a strong history at the Mayakoba. That includes four straight made cuts and a fourth in 2016. Reavie made the weekend in 11 of his past 13 starts, including a third at the Safeway Open and a 29th at the Masters.

McCarthy missed the cut at the RSM Classic. Sense a theme? Before that, he’d scored two finishes inside the top six in his past three tournaments. He’s also proven steady at the Mayakoba, making the cut in his past three starts. At this salary level, we’re happy to see a guy make the weekend with a chance at a top-20 finish. 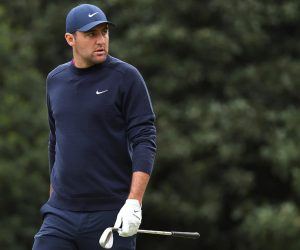