In a men’s college basketball season punctuated by major upsets and a lack of predictability, the Louisville Cardinals (7-0) are the latest team to take on the mantle of the nation’s top team.

Louisville received 48 first-place votes to take the No. 1 ranking in the AP Top 25 poll, while also claiming the top spot in the USA Today Coaches Poll.

The Cardinals started the season as a top five team, and moved up to No. 2 last week. They took the top spot thanks to Duke’s historic loss to Stephen F. Austin on Tuesday, which was the first home non-conference loss for the Blue Devils since 2000. Duke (7-1) slipped to 10th place in the AP poll.

Louisville has yet to play a ranked team this season, with its best win likely being its opening 87-74 victory over Miami.

The Cardinals will take on an elite opponent on Tuesday when they battle the Michigan Wolverines. Previously unranked, Michigan (7-0) moved all the way up to No. 4 in the AP poll after winning the Battle 4 Atlantis in the Bahamas. The Wolverines overcame Iowa State, North Carolina, and Gonzaga to win the invitational tournament, and tie Kansas for the highest-ever debut for a previously unranked team in the history of the AP Poll.

“I’m sure we’re on the map now,” first year Michigan coach, Juwan Howard told reporters. “A lot of teams are looking and seeing Michigan as a name that’s out there. When you beat teams like Creighton and Iowa State, as well as North Carolina and Gonzaga, you’re no longer under the radar.”

Louisville will host Michigan for Tuesday’s matchup, which is part of the Big Ten/ACC Challenge. While most American sportsbooks haven’t yet listed odds for the game, BetOnline has opened the Cardinals as a 5.5-point favorite.

Louisville is the fourth team to hold the No. 1 ranking in the AP Poll so far this season. Michigan State started in the top position, but was overtaken by Kentucky after the Wildcats beat the Spartans in the Champions Classic to start the season. After Kentucky was upset by Evansville, Duke rose to No. 1 and won a couple games before the Stephen F. Austin loss ended their reign at the top.

Louisville’s rise to the No. 1 ranking has also put them among the favorites to win the NCAA Championship this year, though oddsmakers see the field as wide open. The Cardinals (+900) and Michigan State (+900) are the co-favorites at DraftKings Sportsbook, but are barely ahead of Kentucky (+1000), Duke (+1000), and North Carolina (+1200), with eight more teams being listed at odds of +2000 or shorter.

Kansas Worst Losing Streak Since 2013, Slump-Buster on Deck vs TCU 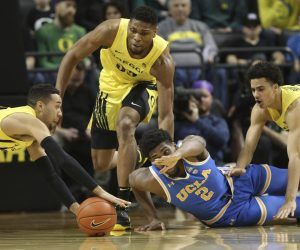 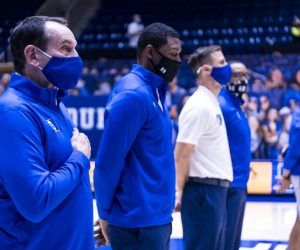 Coach K Out of Quarantine, Shares Thoughts on Violent Coup Attempt at Capitol and COVID-19 Surge