Joey Logano summed up the competition for the Monster Energy NASCAR Cup Series Championship that will be decided at the EcoBoost 400 on Sunday when he said, “It’s the Big 3 and me.”

That has been the theme all year for the NASCAR season, as drivers Kevin Harvick Martin Truex, Jr., and Kyle Busch dominated the sport, winning more than half the races, including those in the playoffs.

Logano can put an end to the reign of the trio and capture his first year-end title with a victory at Homestead Miami Speedway. His three competitors for the Cup have all won it before. Truex is the defending champion, Busch won in 2016, and Harvick in 2015. 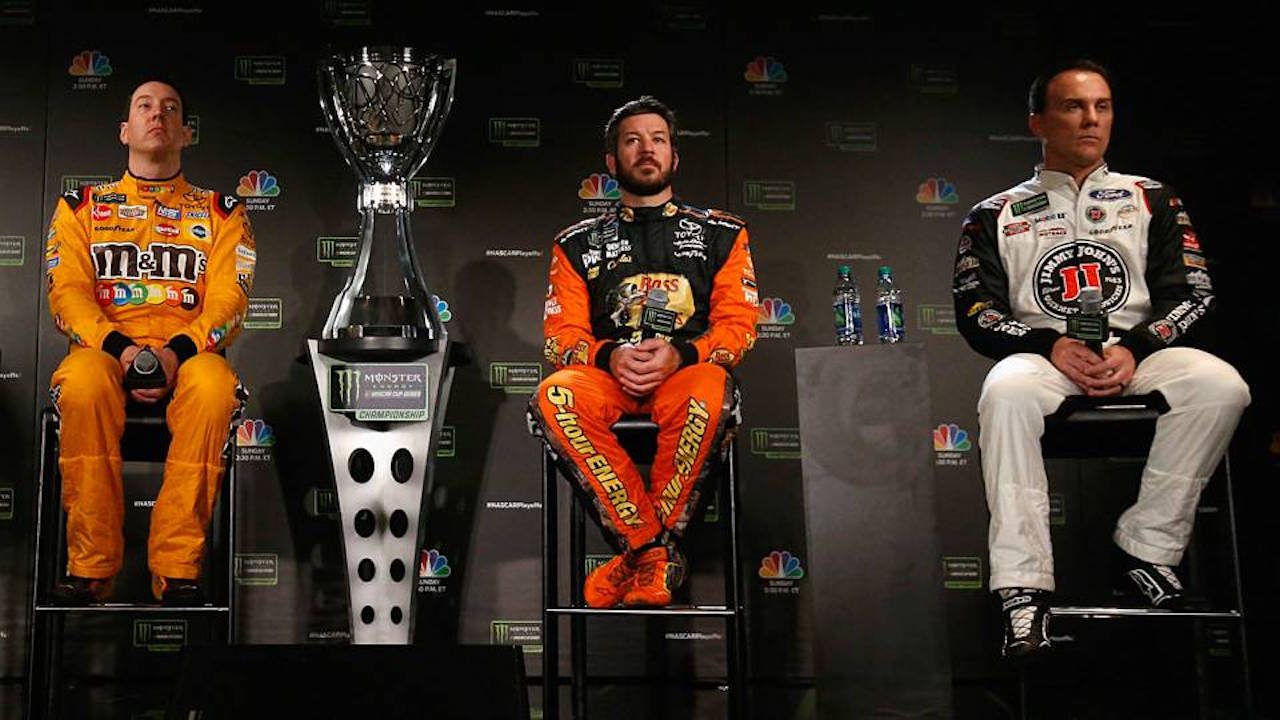 The Big Three in NASCAR of Kyle Busch, Martin Truex Jr., and Kevin Harvick are the favorites to take the season title on Sunday. (Image: Getty)Not surprisingly Logano has the worst odds of the four to win, not only Sunday’s race, but the championship. He is 10/1 to take the EcoBoost 400, and 4/1 to win the title.

Though there will be a full field racing at Homestead, oddsmakers believe the four competing for the Cup will be the ones who will grab the checkered flag. Only Kyle Larson at 13/4 has better odds than Truex and Logano.

Truex is counting on either him, or one of the Big 3 to win.

“There’s I think about a 99 percent chance that one of these guys is going to win it to win the championship,” Truex said. “That’s what you come down here prepared for as a group, as a team, as a driver, and that’s your goal coming here to win, and then you can guarantee yourself a championship.”

Though they don’t have to win, it makes life a lot easier. That is what Truex did last year, capturing the EcoBoost 400 to win the season-ending championship.

With that title on the line, the four drivers are not adverse to trading a little paint. That was the case at Martinsville three weeks ago when Logano used a bump and run maneuver on the final lap to steal the race away from Truex.

At the media day for this week’s race Busch took a no so subtle jab at Logano, when asked about him and Brad Keselowski.

“They both run into you a lot,” Busch said.

Truex said he and Logano had talked about the incident and both were fine with what happened.

“Absolutely. I have a free pass,” Truex said about if he had the chance to bump Logano. “He already told me I could. He told me he’s fair game. So here we go.”

Busch said that he hoped the other drivers in the race give a little cushion to the four.

“As far as other [non-Final Four] drivers go, you don’t necessarily expect them to race any differently,” Busch said. “They have their own race, their own season and sponsors and everything. They are trying to finish out strong for their own reasons. “Many of them are vying for a job next year, You don’t expect them to roll over for you. But I would say you just expect to be given that extra quarter-inch. You don’t need an inch, or a foot, just a little bit being one of the Championship Four guys. But overall you’ve got to go out and race hard.”

Denny Hamlin Gets DQ’d at Pocono Raceway, Wins the Internet