YouTuber Jake Paul dominated fellow social media star AnEsonGib (Ali Eson Gib) in the boxing ring on Thursday night, knocking him down twice on the way to a first-round stoppage in Miami.

The fight marked the professional debut for both Paul and AnEsonGib, each of whom had previously fought in amateur boxing contests.

AnEsonGib opened the fight by coming out aggressively. But he employed an unorthodox, crouching stance, and was unable to mount any effective offense.

Meanwhile, Paul looked more like a trained boxer. He landed a hard right hand to score his first knockdown within a minute of the fight’s start. From there, Paul looked to end the fight quickly. He floored AnEsonGib with a left hook for a second knockdown, then forced a stoppage after a right cross left his opponent staggered.

The fight was officially waved off at 2:18 of the first round.

Paul trained for the fight at Big Bear in California with the help of boxing hall-of-famer Shane Mosley.

“I caught the boxing bug, I put the work in, and I’m in love with the sport,” Paul said afterwards. “My power, my speed won in the first round.”

Thursday’s fight was only the latest in a serious of bouts – first amateur, then later professional – between YouTube personalities.

In November, Logan Paul – Jake’s brother – fought KSI (Olajide William Olatunji) in a sanctioned six-round contest. KSI won by split decision, though Paul has protested that result, as he was deducted two points for holding KSI’s head and landing a punch after a knockdown.

Jake Paul called out KSI – who was in attendance – after his win on Thursday, issuing him a direct challenge.

“KSI’s next,” Paul said before security separated the two men. “I didn’t have to f—ing win by two points. You had to beat my bro by a bad call.”

The Paul vs. AnEsonGib bout earned the most mainstream media attention on a card that included three world title fights.

The evening’s main event saw WBO middleweight champion Demetrius Andrade knock down challenger Luke Keeler in each of the first two rounds, before finishing off a TKO victory in the ninth. Andrade (29-0, 18 KOs) remains undefeated. After the fight, Andrade called out WBO super middleweight champion Billy Joe Saunders, fueling speculation that Andrade may move up a weight class to chase another world title. 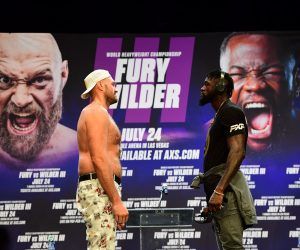 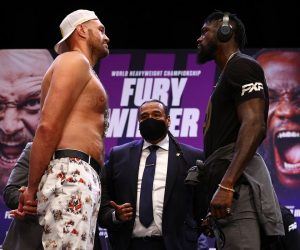