According to the Los Angeles Times, at least 100 workers were infected. That’s a four-fold increase from the 24 confirmed COVID-19 cases reported last week when the track abruptly shut down on Nov. 13. The Times reported approximately 500 people were tested, with at least 20% of those results still outstanding.

Neither track officials, nor the City of Berkeley, would specify the exact number of infected individuals connected to Golden Gate Fields.

The track issued a release announcing it suspended racing through at least the end of November. It originally planned on reopening this week. With an outbreak like this, however, it’s hard to imagine the track resuming before its planned Dec. 13 closing day.

The CHRB Takes Its Turn Addressing This

Golden Gate Fields is looking at a minimum of 11 canceled racing days due to this outbreak and its aftermath.

The California Horse Racing Board wasted little time addressing this in its Thursday meeting. The Stronach Group’s Aidan Butler, who used to oversee California racing for the group before his promotion to chief operating officer, flew in from Florida to address the meeting. He said the outbreak spread so rapidly because 95% of the affected people were asymptomatic.

Butler said all the infected individuals were off-site at hotels and are being fed two meals a day by TSG. Butler told the board TSG is doing everything it could to keep the virus contained. At the same time, the Thoroughbred Owners of California (TOC) said it’s working with TSG to ensure the 1,300 horses stabled at Golden Gate Fields have sufficient personnel for their care.

“We are doing everything possible and needed to get this spike of COVID cases under control,” Butler told the CHRB. “So far, everything seems to be going according to plan.”

The Berkeley Public Health Department plays a role in that plan. Its case managers oversee all positive cases and its protocols mandate that no one testing positive may return to Golden Gate Fields until being cleared by the BPHD.

“Golden Gate Fields will continue to monitor the situation in collaboration with the BPHD and will look forward to resuming live racing with the announcement of a reopening date as soon as possible,” the release said. 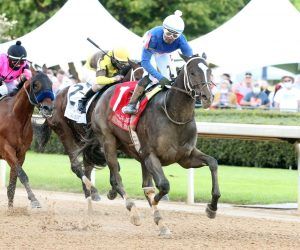 Kentucky Derby Points Show the 20 Survivors of the Derby Trail