Dominic Thiem won three tiebreaks to overcome Rafael Nadal at the Australian Open on Wednesday, a victory that put the Austrian in his first Grand Slam semifinal away from the clay courts of the French Open.

Nadal and Thiem engaged in a physical match filled with long, drawn-out points. The match lasted over four hours, despite going just four sets — a testament to how hard the players had to work for each point.

Nadal admitted after the match that he hadn’t played badly – Thiem had just been better.

“He’s playing with a lot of energy…so well done for him,” Nadal said. “I honestly didn’t play a bad match.”

Thiem agreed with that assessment, though he credited luck as much as his own skill in getting the win.

“The match was on a very good level. We were both in good form,” Thiem said in a post-match interview. “Today I had a feeling I was lucky in the right situations. The net cord was on my side. He is one of the greatest of all time, so you do sometimes need luck to beat him.”

Thiem will face Alexander Zverev in the Australian Open semifinals. Zverev dropped the first set of his match against Stan Wawrinka, but came back to win 1-6, 6-3, 6-4, 6-2 and reach his first Grand Slam semifinal.  Zverev cited a change in perspective in helping him finally break through on tennis’ biggest stage.

“I was very impatient. In a way, also was maybe paying attention to it too much, to the Grand Slams,” Zverev told reporters. “As I said, it’s going to be a process [at the] beginning of the week with the first few matches. I hope I could just get through them and start playing better as the tournament gets along. This is what happened.”

“Perfection doesn’t exist, but I’m very happy with the way I played,” Halep said of her performance. “I felt great on court. I was moving great.”

Meanwhile, Garbine Muguruza continued her impressive run at the Australian Open, beating No. 30 Anastasia Pavlyuchenkova, 7-5, 6-3. Muguruza has won two Grand Slam titles in her career, but had never before advanced past the quarterfinals in Melbourne.

Thursday sees both women’s semifinal matches play out at Rod Laver Arena. No. 1 seed Ashleigh Barty faces American Sofia Kenin, with DraftKings Sportsbook listing Barty as a -330 favorite in the match. Halep (-152) then takes on Muguruza (+128) in the other semifinal.

The showcase matchup pits men’s No. 2 seed Novak Djokovic against No. 3 seed Roger Federer in the first men’s semifinal. Djokovic is an overwhelming -800 favorite, thanks in part to the fact that Federer (+570) is recovering from a groin injury suffered in his five-set quarterfinal win. 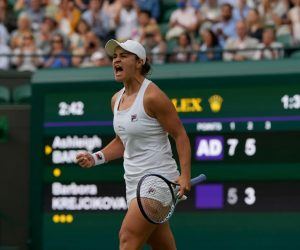 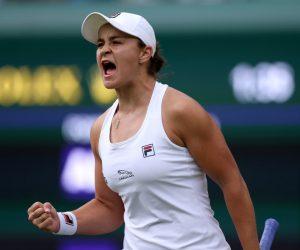 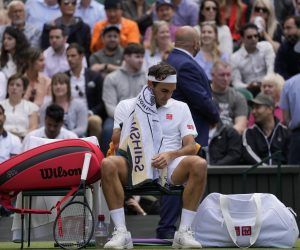 Roger Federer Loses in Straight Sets at Wimbledon, Hurkacz Through to Semifinals