PSG is considered a +120 favorite over Real Madrid (+200) heading into the match, according to FanDuel Sportsbook.

While both clubs are listed among the favorites to win the Champions League this season, PSG and Real Madrid are each dealing with serious issues that might detail their campaigns.

For PSG, there are issues with several of its top attackers. Young star Kylian Mbappe is injured, as is Edinson Cavani. Meanwhile, Neymar is dealing with a suspension, not to mention the lingering tensions over his desire to leave the club – something that has turned even PSG’s own fans against the Brazilian, now that it is public knowledge how little he wants to be there.

For Real Madrid, this is the first time in four years that the club isn’t coming into the Champions League as defending champions. That in itself is not a problem: any team would happily take four European titles in six years and consider it a resounding success.

But the European titles have obscured the fact that Real hasn’t been playing well in La Liga. Now, without domestic or Champions League glory, the pressure is on for results. The club spend big in the offseason, bringing in Eden Hazard and Luka Jovic among others in the hopes of deepening an already talented team.

Hazard finally made his debut on Saturday, and says he’s ready to contribute to earning Real another Champions League title.

“Since I arrived I felt the connection that Real Madrid has with the Champions League,” Hazard told reporters. “Being here is a dream for me and I hope to make the most of it.”

Also on Wednesday, Cristiano Ronaldo and Juventus will travel to Atletico Madrid. Ronaldo – formerly of Real Madrid – is still hated by supporters of his former rival, and Atletico manager Diego Simeone says he’s wary of the impact Ronaldo can have on a match.

“It’s difficult to play against him,” Simeone said at a press conference. “He is a goal animal.”

Half of the Champions League field started their group stage campaigns on Tuesday. In the highest profile matches of the day, Barcelona managed a scoreless draw at Dortmund, while Napoli scored a 2-0 win at home over defending champion Liverpool.

Notably, two of the smaller clubs still alive in the competition managed to grab a point against teams from Europe’s biggest leagues.

Inter Milan needed an added time goal by Nicolo Barella to escape with a 1-1 draw at home against Slavia Praha, which appeared poised for an upset win after Peter Olayinka scored in the 63rd minute. Similarly, Zenit Saint Petersburg got a goal late in the first half by Sardar Azmoun, then held on for a 1-1 away draw against French side Lyon. 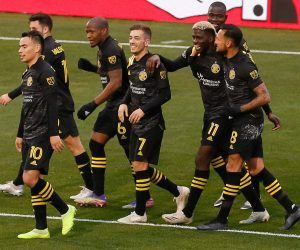 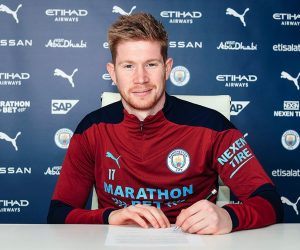 De Bruyne Extends His Contract at City, Data Analysts Assure Him He’s in the Right Place