Angel Di Maria scored twice in the first half to sink his former club as Paris Saint-Germain coasted to a 3-0 victory over Real Madrid in their opening Champions League group stage match.

Di Maria opened the scoring in the 14th minute, then added his second goal in the 33rd minute to lead the French side to victory.

Bale Has Goal Overturned by VAR

Real Madrid nearly pulled itself back in the game minutes after Di Maria’s second goal, when Gareth Bale hammered home a volley. But VAR found that he had committed a handball prior to the shot, negating the goal.

With the match already all but over, PSG pushed their lead to three goals in added time when defender Thomas Meunier scored at the end of a counterattack to finish the barrage.

The victory gave PSG three critical points against heir chief rival in Group A, and the club did so without perhaps its three best attackers in Neymar, Kylian Mbappe, and Edinson Cavani.

With his team dominated from start to finish – Real Madrid failed to get a single shot on target in the match – manager Zinedine Zidane said he was disappointed in how his squad approached the game.

“They were superior to us in everything they did,” Zidane told reporters. “And in intensity, which annoys me the most.”

In Group D, Juventus looked to e on its way to a big road victory before Atletico Madrid came back to escape with a 2-2 draw.

After a scoreless first half, Juan Cuadrado and Blaise Matuidi put the visitors on top 2-0 after 65 minutes. But Stefan Savic gave Atletico a lifeline with 20 minutes to play, and Hector Herrera put in a header in the 90th minute to rescue a point for the hosts.

“This team is renowned for suffering and fighting until the end,” Herrera told reporters after the match. “This result tastes better than most draws. Of course, we wanted to win, but a draw is good given how tough Juventus are.”

A similar story played out in Greece, where Tottenham Hotspur jumped out to a 2-0 lead behind a penalty by Harry Kane and a second goal by Lucas Moura. But Olympiakos fought back, with a second-half penalty by Mathieu Valbuena securing a 2-2 draw.

Despite blowing the lead, however, Kane suggested that getting a point on the road was hardly a death knell for Spurs.

“Last season we didn’t start to well and had to play catch up,” Kane told BT Sport, referring to how Tottenham eventually reached the Champions League final last season. “This is only the first game and we are definitely backing ourselves to go through.” 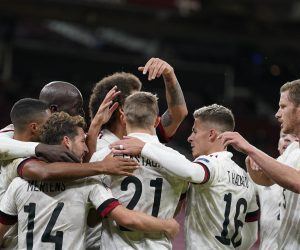