On a day for sprinters at Le Tour, four of them barreled toward the finish line at Poitiers. A photo finish revealed that Australian rider Caleb Ewan (Lotto Soudal) finished Stage 11 of the Tour de France by a sliver of a wheel, ahead of Sam Bennett (Deceuninck-QuickStep), Wout Van Aert (Jumbo-Visma), and Peter Sagan (Bora-Hansgrohe).

“I was quite disappointed with that sprint,” said Ewan. “I’m happy to repay my teammates with the win. I didn’t really know I’d won.”

Officials determined Ewan crossed the finish line first ahead of Sagan, whose final burst got flagged by officials for being too dangerous. As a result, Bennet finished in second place and Van Aert took third overall.

Per the Tour de France rule book, Sagan gets relegated to last place in the rider’s group, meaning that he finished in 85th place.

Ewan won Stage 3 at Sisteron at the start of the 2020 Tour de France. He added a second stage victory and denied Van Aert a chance to win his third sprint victory.

Overall, there was no change in the general classification standings. Primoz Roglic retained a 21-second lead over Bernal, last year’s champ.

Stage 11 featured a low-fi 167.5 km ride from the beach at Chatelaillon-Plage to Poitiers, which is best known as the hometown of philosopher Michel Foucault.

The stage unfolded without any drama until the last kilometer of the race. The sprint to the finish was chaotic and messy.

“It was very, very hectic,” explained Ewan. “I dropped back into the bunch, but from there it was quite crazy. I knew from the first stage that I won that I had to stay calm and wait for the right time and right gap to open, and it did in the end.”

“A big part of sprinting is bumping shoulders and rubbing shoulders,” said Sagan. “I have to see it, I really don’t know what happened, but when did sprinting get soft?”

Stage 12 is no joke. The 218 km ride from Chauvigny to Sarran is the longest on this year’s tour.

The stage is hilly, with four climbs. The peloton will face its biggest challenge toward the conclusion of Stage 12 during a quick 3.8 km Category 2 climb up Suc a May before making a final 26 km ride into Sarran.

Julian Alaphilippe (DQS) comes into Stage 12 as the 5/1 favorite to finish first at Sarran. Greg Van Avermaet (CCC) at 10/1 and Marc Hirshi (UCI) at 15/1 are the other favorites to secure victories at Stage 15.

Defending champ Bernal is second on the futures board at +275 odds.

Romain Bardet, the great French hope this year, sits in fourth place and trails Roglic by 30 seconds. Bardet is a 50/1 shot to pull off a sick comeback and become the first Frenchman to win Le Tour since 1985 when The Badger rode to victory. 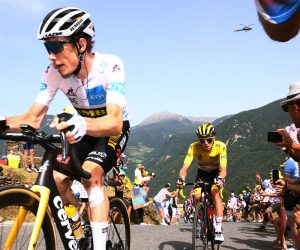