Despite an injury to Lauren Cox, Kim Mulkey’s Baylor (37-1) held off a late rally by defending champions Notre Dame (35-4) to win the 2019 Women’s College Basketball Championship by the score 82-81.

The Lady Bears won their second title since 2012 and their third overall title since 2005. Only Tennessee and UCONN have won three or more championships. Credit head coach Kim Mulkey for guiding the Lady Bears back to the promised land. Baylor, with the #1 seed, picked off Sabrina Ionescu and #2 Oregon in the Final Four.

Mulkey now has three titles with Baylor. Mulkey also is in an elite group of coaches with Dean Smith and Bobby Knight who won a national championship as a player and a coach. She won a title playing for Louisiana Tech in 1982 and won three coaching at Baylor.

Notre Dame, also with a #1 seed, returned to the championship game to defend their title by beating #2 UCONN in the semifinals. In the finals, Notre Dame stumbled out of the gate and Baylor opened up a nine-point lead at the onset of the game. It seems as though Notre Dame was stuck trying to catch up for the next three quarters. Notre Dame erased a 14-point deficit, but Baylor still has a little gas left in the tank to finish off Notre Dame.

Baylor lost only one game all season. They were led by their top two players Lauren Cox and Kalani Brown. Cox went down with a knee injury with a minute to go in the third quarter. She had scored 8 points on 3-for-6 shooting, while hauling down 8 rebounds. Initially everyone was stunned to see their emotional leader down on the floor.

However, everyone on the team rallied behind their fallen teammate.

“They just kept doing what we’ve been taught to do, and that’s guard people,” Baylor coach Kim Mulkey said. “We just beat the defending national champions. That team is so good, so talented. You’re going to see those guys play at the next level.”

At that point, Brown took over. She finished the game with a double-double for 20 points and 13 assists. She went 10-for-16 from the floor, which made up for her 0-for-5 clip at the charity stripe. Down 1 point with 2:35 remaining, Brown hit a key jumper to put the Lady Bears ahead for good.

Senior guard Chloe Jackson also stepped up in her final game for the Lady Bears. She led Baylor with 26 points on 13-for-25 shooting. Jackson scored the final two baskets for Baylor to help seal the one-point victory. Jackson got named the Most Outstanding Player of the Tournament. But her teammate, Lauren Cox, was the true inspiration for the victory.

“We had to do it for LC,” said Jackson, who was named the Final Four’s Most Outstanding Player. “She got us here. We had to finish the job for her.”

With three titles for Kim Mulkey, she trails the legendary Pat Summit, who won 8 titles with Tennessee. Geno Auriemma holds the current record with 11 titles with UCONN.

One Final Stand for the Fighting Irish

The Irish waited until the fourth quarter to bring the heat. They unleashed a 19-8 run to pull dead even at 74-74. Marina Mabrey got hot from downtown and she traded off baskets with Jessica Shepherd and Arike Ogunbowale.

With the score tied at 76-76 and four minutes remaining, Notre Dame would not score another basket. Baylor hunkered down on defense and did not allow another bucket. All of Notre Dame’s last five points would come at the free throw line.

Ogunbowale led all scorers with 31 points including 3-for-5 from three-point land. She missed a crucial free throw late in the game that could have tied the game with under two seconds remaining.

“It just wasn’t meant to be,” said Ogunbowale. “It’s going to be a hard pill to swallow. But things happen.”

Ogunbowale led Notre Dame to a championship in 2018 when she hit a buzzer beater to lead them to their first title.

Mabrey chipped in 21 points including four three-pointers. Briana Turner and Jessica Shepherd both contributed double-doubles for Notre Dame. However, Notre Dame came up short this time.

For the third year in a row, a different team (South Carolina, Notre Dame, and Baylor) has won the title after UCONN won four straight from 2012-2016. 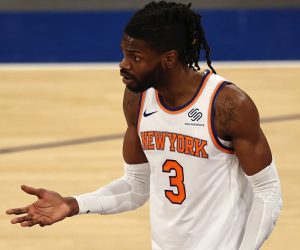