If you pay close attention to what the oddsmakers at the Westgate SuperBook think, then the AFC South looks like a two-team race. The Houston Texans are the odd man out at 5/1 odds to win the AFC South, with the Tennessee Titans at 9/5 odds and Indianapolis Colts at “even money” odds to win the divisional title. Who would have thought that one man, Philip Rivers, could tip the balance of power in the AFC South?

Rivers went from the Bolts to the Colts. The ex-Chargers QB signed a one-year deal with Indianapolis. The addition of Rivers made the Colts a slight favorite over the Titans, who were the huge surprise in last season’s playoffs.

The Texans won the AFC South division title last season with a 10-6 record. The Titans finished 9-7 to secure an AFC wild-card spot, but played the role of spoiler by knocking out the New England Patriots and Baltimore Ravens.

There’s no love for the Jacksonville Jaguars. They’re bringing up the rear in the AFC South with 40/1 odds to win the division. Don’t tell Gardner Minshew though. The happy-go-lucky QB from Washington State thrives on adversity.

The Titans finished second in the AFC South last season. They were underdogs coming into the AFC wild-card game against the New England Patriots, but prevailed 20-13 thanks to Derrick Henry’s heroics. In the AFC Divisional round, the Titans stunned the Baltimore Ravens 28-12. The Titans’ magic fizzled out in the AFC Championship against the eventual Super Bowl champion Kansas City Chiefs.

Henry had a monster season and even crazier postseason. The 2015 Heisman Trophy-winning running back out of Alabama led the NFL in attempts (303), rushing yards (1540), and touchdowns (tied with Aaron Jones for 16), all of which he achieved in only 15 games. Henry ranked #5 in the NFL with 5.1 yards per carry.

Historically speaking, it’s difficult for workhorse running backs to replicate their remarkable rushing feats in consecutive seasons. Especially in the case of Henry who added three playoff games to his already worn-out body. For a second-consecutive season, Henry rushed for more than 1K yards (1,059 in 2018 with 12 touchdowns).

Will Henry run out of gas this season? Can Ryan Tannehill continue to play at a high level? Will head coach Mike Vrabel be hell-bent on proving the Titans aren’t a “one-hit wonder” who’ll miss the postseason after getting within one game of a Super Bowl appearance?

The Titans were a popular pick to win the division, but that was before the Colts added Rivers. You can find the Titans at 9/5 odds to win the AFC South.

The Titans have an easier schedule than their division foes. Their toughest games include road matches against the Minnesota Vikings, Baltimore Ravens, and Green Bay Packers. The Titans host Buffalo, Pittsburgh, and Chicago.

Andrew Luck surprised the sporting world when he retired before the start of the 2019 NFL season. The injuries piled up over the last few seasons and Luck didn’t have enough time to heal. He became another example of the brutality of the sport. Talent goes a long way in the NFL, but the ability to avoid injuries is just as crucial.

Say what you want about Rivers, but the old man has been blessed by the football gods. Rivers took plenty of lickings over the last 16 seasons in San Diego/Los Angeles, but he still managed to start all 16 regular-season games since 2004.

Rivers, 38, is currently ranked #5 all-time with 224 consecutive starts. If Rivers fades serious injury in 2020, he’ll finish the season tied with Mick Tingelhoff for third all-time with 240 consecutive starts. Hall of Famer Brett Favre holds the NFL “Iron Man” record with an astonishing 297 starts (which came at a costly toll and aided his addiction to painkillers, which Favre admitted in his memoir). Rivers will have to play four more injury-less seasons to pass Favre.

After Rivers swapped a lightning bolt logo for a horseshoe logo, the money began tumbling in on the Colts to win the division. The Colts jumped ahead of the Titans and are now even-money odds to win the AFC South.

The Houston Texans traded future Hall of Fame WR DeAndre Hopkins to the Arizona Cardinals for RB David Johnson. When you trade away a stud WR for a washed-up RB, it makes you wonder what the heck is Bill O’Brien smoking?

Johnson found himself buried on the Cards’ depth chart behind Kenyan Drake and Chase Edmonds, yet the Texans gave up their best player for him. The trade was so uneven that even the popular video game, Madden Football, declined the trade for its lopsidedness.

The reaction in Houston wasn’t good. Teammates couldn’t believe it, and assumed it was “fake news” or a hoax when the news exploded on social media.

Houston also kicks off the season with four difficult games, including two road trips to Kansas City and at Pittsburgh. They host the Baltimore Ravens in Week 2 and the Minnesota Vikings in Week 4.

Their schedule doesn’t let up in October either, with games at Tennessee and a home game against the Green Bay Packers. If the Texans don’t look sharp to start the season, they could head into the bye in Week 8 with a 1-6 record.

The second half of the season looks easier, but the Texans still have to host the New England Patriots and play the Bears at Soldier Field in Chicago. 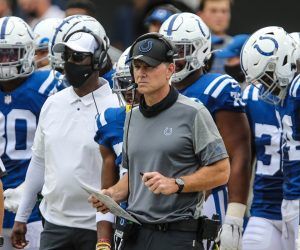